More students will get a shot at college through the Massachusetts Early College Initiative, launched in 2017 and aimed at helping high school students from low-income families and communities of color access college courses in high school.

The state is now more than doubling its investment in early college, which is expected to see an increase of 2,500 students this school year — about a 50 percent increase to approximately 7,500. Tucked into the state’s $52.7 billion spending plan is $19 million to help scale up early college programs for schools throughout Massachusetts.

In addition, five high schools and their college partners were awarded a total of $750,000 to create early college programs that are large-scale, with at least 400 students or the whole school participating. This new “immersive early college” model will provide students with an opportunity to earn a minimum of 30 college credits prior to graduating high school. Each of the following schools received $150,000 in grant funding:

Additionally, nine schools were awarded expansion grants, totaling more than $650,000, to support their existing early college programs and boost the number of students enrolled, particularly those underrepresented in higher education. The grantees include:

See the recent report released by Job for the Future on the Early College Program in Lawrence.

Enhancing the Impact of the Build Back Better Act: Integrating College in High School Programs

The College in High School Alliance shared a set of recommendations that were released by a group of national advocates September 14, 2021 on ways in which college in high school programs like dual enrollment and early college can be integrated into President Biden’s American Families Plan and the funding package Democrats are currently considering in the House and Senate to implement it.

The primary recommendations by the groups – including the Alliance for Excellent Education, Education Reform Now, Empower Schools, JFF, KnowledgeWorks, NACEP, and Unidos US – are to:

The House and Senate are currently in the middle of assembling their funding packages, and will be using a congressional procedure known as “reconciliation” to pass a number of President Biden’s priorities using only Democratic votes.

Highlighting the Importance and Success of Early College Programs in Massachusetts 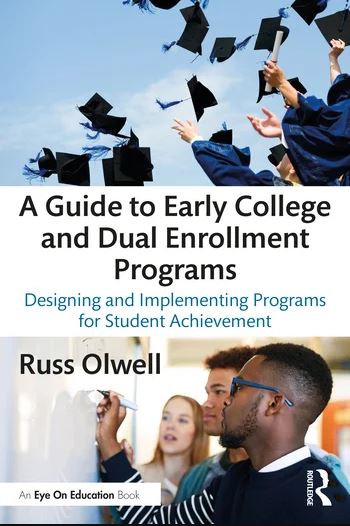 In this Discussion Paper published by MassINC in April 2021, a strong case is made for a major effort to expand access to Early College. As stated in the introduction, “Leaders in the public, private, and nonprofit sectors have unanimously come out in favor of bold change to combat structural inequality in our post-pandemic commonwealth. Any meaningful response to this call to action must target wide and growing college completion gaps.” 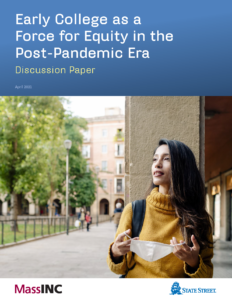 Early College in the News

Early College a Proven Winner for Students, State: Massachusetts Should Consider Scaling Up the Initiative

Early college programs, in which high school students take college courses that offer credit toward both a high school diploma and a college degree, present a scalable education model that meets the needs of historically underserved young people by leveraging the assets of our state’s higher education system. These programs ultimately reduce the time and cost of degree completion while giving young people the confidence to succeed in college.

Read the February 21 article by Jennifer Davis Carey and Chris Gabriele in the Commonwealth Magazine by clicking HERE.

Early College Catching On, But Not Immune from Pandemic Impacts

BOSTON (SHNS) – Enrollment in early college programs in Massachusetts has continually increased over the past three years, even while the COVID-19 pandemic has thrown many teenagers’ post-high school planning into flux.

Merrimack is one of 19 colleges and universities in Massachusetts offering disadvantaged high-school students the opportunity to earn free college credits while still in high school. These programs work to address educational equity and economic recovery.

Read the February 19 article in The Beacon, Merrimack’s student-run news organization by  HERE.

This series of pre-recorded webinars highlights the five required pre-employment transition services. Each of the five webinars include curricula/activities, state spotlights, examples of expected outcomes and ways to identify student progress, tips for successful service delivery, and additional supports and resources that may be used to provide these services for students with disabilities. The webinars are hosted by The Workforce Innovation Technical Assistance Center (WINTAC), and The National Transition Technical Assistance Center (NTACT).

Closed Captioning will stream during each of the pre-recorded webinars. A copy of the transcript is also available upon request. Presentation materials are available for download once registered. Please be sure to complete the evaluation located in the Web links pod in the Adobe room. CRC credits (1.5) will be awarded upon completion and submission of your evaluation.

To register and view this recorded webinar, please visit the following link(s) to each webinar:

Admissions Officers Should Look at Career and Technical High Schools

Russ Olwell is the Associate Dean of Education and Social Policy at Merrimack College.

Thank you for joining us for the Summer Leadership Series. If you missed any sessions, view the videos and PowerPoint presentations by clicking links below.

Using an evidence-based approach, programs being launched now by colleges and universities focus on the core missions of early college and dual enrollment programs, connecting youth less likely to attend college directly out of high school with powerful programming that propels them towards successful completion of degrees and to the start of their career. This article presents perspectives from a range of institutions (high school, two-year institutions, four-year institutions, and philanthropic investors) that are rethinking these models to maximize community impact and affordability to students and families.  This is based on experience in Massachusetts statewide, as well as at Merrimack College and at Bristol Community College. The journal was very interested in Massachusetts’ efforts in this area, and in the efforts to create a truly equitable system for early college from the start!

DESE is providing initial guidance for school reopening this fall that prioritizes getting students back to school in person—safely, following a comprehensive set of health and safety requirements. At the same time, DESE is requiring each district and school to also plan for remote learning and a hybrid school model, a combination of in-person and remote learning, should local conditions change this fall or winter.

ASCD’s Annual Conference will be held virtually this year and it’s FREE to attend! Join thousands of your peers to discuss strategies and solutions for the challenges educators will face in the 2020-2021 school year.

Since the initial pause on hybrid delivery took place, the world has undergone a dramatic transformation involving remote learning.  Given the unexpected experience our programs have had to develop around online delivery and support of college credits to high school students, please read the statement regarding hybrid programs and designation.

The College in High School Alliance (CHSA) and State Higher Education Exective Officers Association (SHEEO) invite you to participate in a webinar examining dual enrollment funding models in the context of the COVID-19 pandemic.

An editorial by Nancy Hoffman, Senior Advisor with Jobs for the Future (JFF), saluting early college students in Massachusetts was published by The Boston Globe on Friday. June 5, 2020.

Jobs for the Future’s Annual Conference will be held virtually this year from June 8-11. Free of charge, visit the homepage for the Horizons: Designing a Future That Works Conference to register and sign up for sessions of interest.